Sonny Colbrelli shines at the GranPiemonte 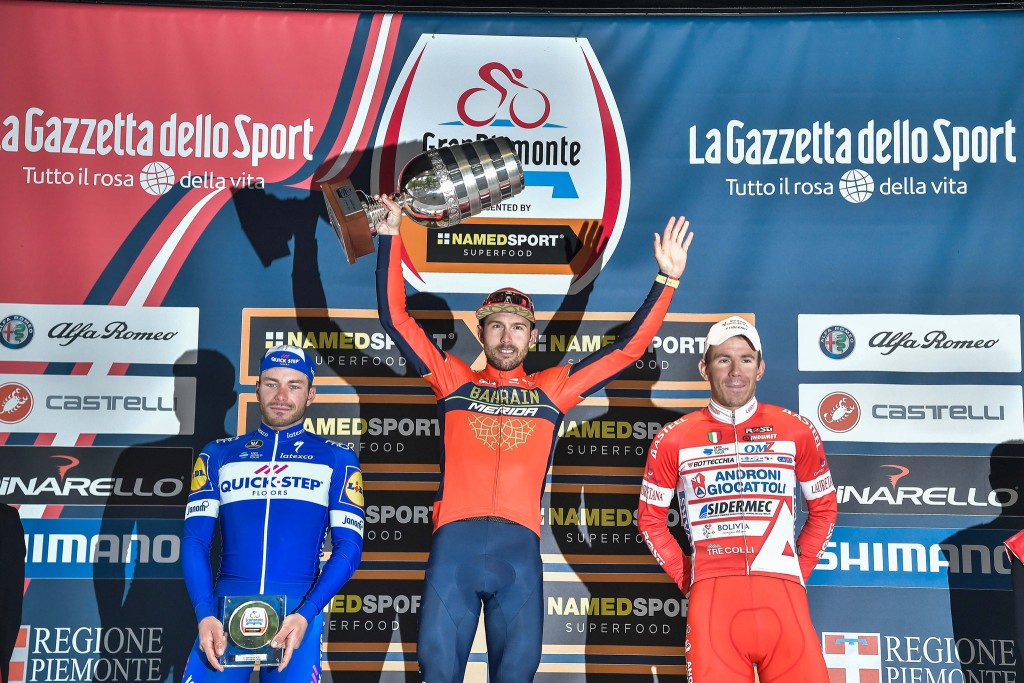 Italy’s Sonny Colbrelli of Bahrain-Merida concluded his 2018 season with a victory at the GranPiemonte eight months after he opened it with a powerful stage win at the Dubai Tour. He outsprinted Frenchman Florian Sénéchal from Quick-Step Floors and his compatriot Davide Ballerini in front of the spectacular hunting palace of Stupigini. Ballerini’s result secured success for his Androni Giocattoli-Sidermec team in the Ciclismo Cup.

The winner, Sonny Colbrelli said in the post-race press conference: “With 2km to go, I realized the bunch was split and I told my team-mate Kristjan Koren to ride as hard as he could after the last curve because we knew that Androni and Bardiani had good lead out trains. When he gave me the way with 500 metres to go, [Paolo] Simion [of Bardiani-CSF] took the lead and I decided to launch my sprint at 350 metres even though it meant a very long sprint. The final stretch seemed to be never ending although I was able to deal with the gap I straight away got for myself. For sure, this victory is dedicated to my baby girl due to be born in about ten days from now. She’ll be named Vittoria! It’s been a season of many second places, including some at a very high level, so it’s nice to finish it off with a win.”

Florian Senechal, second, said: “Second is a good result but I think it was possible for me to win today because when Sonny [Colbrelli] launched his sprint from more than 300 metres, I looked to the left side. After that, I was coming back fast but too late. I’m happy… but not completely happy. I said this morning that I was mostly afraid of crashing but I wasn’t scared. I’m from the north of France and I’m used to racing in Belgium on bad roads. We train for that at Quick-Step and we are used to sprinting with different riders. We have Viviani, Gaviria, Hodeg, Jakobsen… we’re full of sprinters, so every race that comes down to sprint, we go for it.”

Davide Ballerini, third, said: “In reality, I had to lead Manuel [Belletti] out and I started doing it but in the last curve, a gap was created behind me. When I looked back at 500 metres to go, I saw a Katusha – Alpecin rider [Jhonathan Restrepo] behind me and Sonny launched his sprint. He took an advantage of ten meters straight away and I couldn’t close it. But my third place helps secure the final victory as a team in the Ciclismo Cup. That’s what we’ve been looking for since the beginning of the year.”