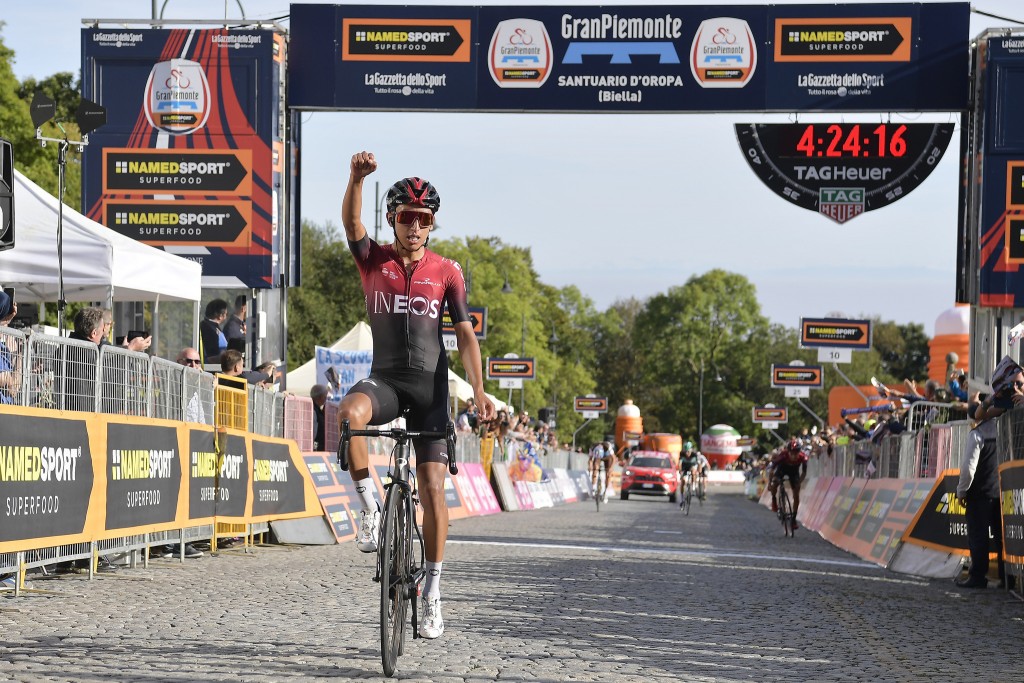 Tour de France winner Egan Bernal triumphed for the first time as a pro rider in Italy and in a one-day race as he soloed to victory in the GranPiemonte NamedSport with 2km remaining before raising his hands up in celebration in the front of the sanctuary of Oropa where top champions like Marco Pantani and Tom Dumoulin have previously made history at the Giro d’Italia. A collective effort ended up in a one-two for the Colombians from Team INEOS with Ivan Sosa in second place while Giro d’Italia stage 17 winner Nans Peters of AG2R La Mondiale rounded out the podium.

The winner, Egan Bernal said in the post-race press conference: “This victory brings me a lot of emotions, especially here, 10km away from where I used to live when I came to Europe for racing. With all the friends I have in Piedmont, I feel at home. This is my first win in Italy and it comes at the top of a climb where Marco Pantani won before. I’m happy with my condition ahead of Il Lombardia. I’ll look for the best possible result on Saturday but with this win in the bag, I can finish the season with serenity. I want to ride the Giro d’Italia, hopefully next year but we’ll have to see the route and discuss with the team.”

Ivan Sosa, second, said: “It’s special to win atop this climb and it’s a great way to finish the 2019 season. It was great to be able to stay at the front with Egan [Bernal]. My motivation was more in my head than in my legs. Our combined efforts were the fruits of a strong motivation to win. Oropa is a special climb for us. Egan and I have lived near here and we knew the roads. As a team, we controlled the race well. Egan rode away at the right time. Things have gone very well for us today.”

Nans Peters, third, said: “It’s a real pleasure to finish the season in good condition, so with a podium here after my stage win at the Giro d’Italia, it means I’ve stepped up this year. Today, I had to remain patient and stay in the wheels as long as possible. I held on as much as I could. Ivan Sosa opened the gas with about 2km to go and Egan Bernal attacked in the steepest part and made us all explode. I rode my own pace to cross the line third, which is the best result I could hope for.”

Androni Giocattoli – Sidermec was honoured on the podium for winning the Ciclismo Cup, with Giovanni Visconti taking the award for the individual classification.