The GranPiemonte, formerly known as Giro del Piemonte until 2008, has been around since 1906. Its route has changed repeatedly over 105 editions, welcoming all kinds of riders – sprinters, classic hunters and pure climbers – under the finish arch.

Starting with today’s post, we will recall the route and the winner of five different recent editions of this ever-changing, ever-thrilling late-season race.

Our short journey begins with the 2020 GranPiemonte, which was raced entirely within the province of Cuneo, from Santo Stefano Belbo to Barolo.

The route that year was 187 km long and nearly out of flat stretches. A 187-km ride crammed with sharp, painful and brutal climbs, which looked quite like shark’s teeth in profile.

That was the route of an outright classic, set amidst the lovely scenery of the Langhe, with a top-notch roster, including the odds-on favourite Mathieu van der Poel, and big-name contenders such as Vincenzo Nibali, Diego Ulissi, Aleksandr Vlasov, Alex Aranburu, Gianni Moscon, Giulio Ciccone and Davide Ballerini, to mention just a few.

The race was decided along the second to last climb. The peloton was on its way to the lovely village of La Morra, nestled among the verdant Nebbiolo vineyards that were blooming in mid-August. Nibali blasted away along that stinging climb, trying to set the pace for Ciccone, and whittled down the peloton to its bare bones. As the Shark was making his final effort, however, George Bennett stepped up the pace from behind, with just Moscon on his wheel.

A few hundred metres before the end of the ascent, Bennett eventually managed to race clear of his opponent, reaching the summit alone, in the emerald green scenery of the meadows and the vineyards that the rain – which had begun to fall in the meantime – only made brighter.

A dozen chasers bunched up along the descent, shaving metre after metre off the breaker’s advantage. By the time they reached the foot of the closing climb to the centre of Barolo, their gap had gone down to just a handful of seconds – a few too much, eventually. Ulissi jumped away with 300 metres to go, but his attack came to nothing, and despite scoring the same time as Bennett, he hopelessly came in second. 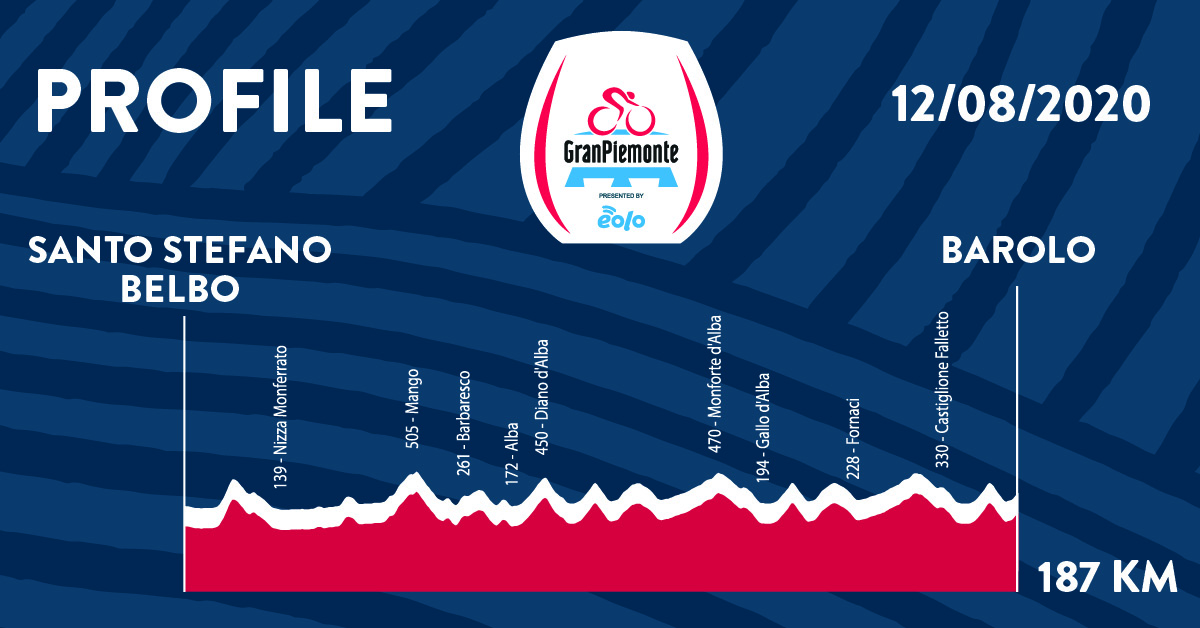