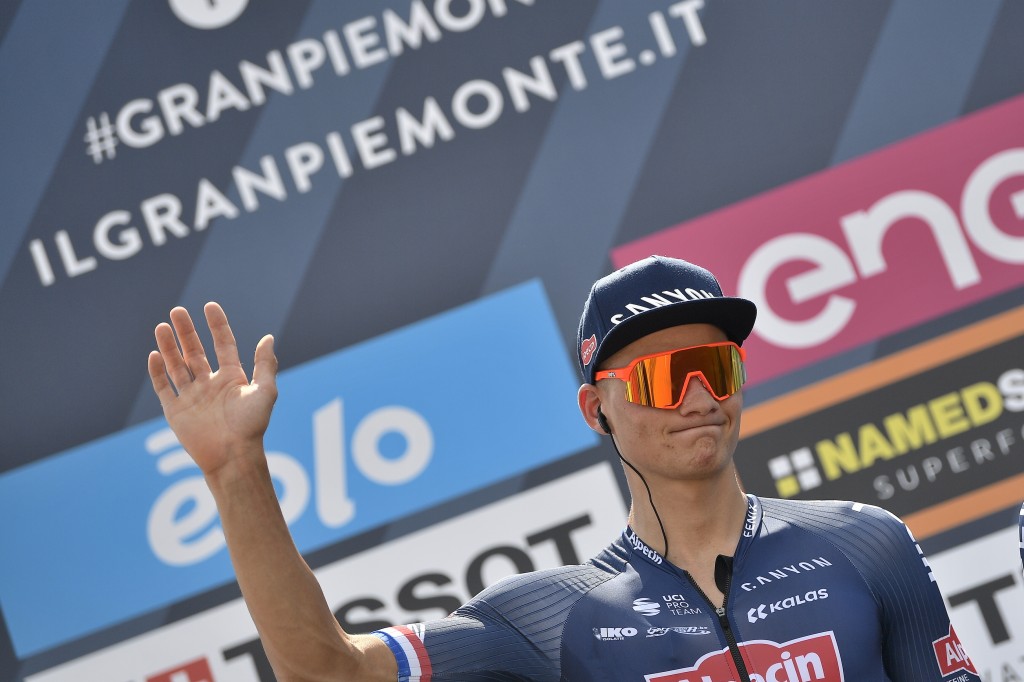 The 104th GranPiemonte presented by EOLO, organised by RCS Sport / La Gazzetta dello Sport with the support of Regione Piemonte. This year’s route presents some major challenges along the rolling Langhe hills, situated in the Piedmont provinces of Asti and Cuneo with a 44km final circuit through the vineyards of the Alba area to be completed twice.

The list of riders equipped with the Velon data-tracking system in today’s race is available via this link.

This year’s race follows a demanding route along the rolling Langhe hills, situated in the Piedmont provinces of Asti and Cuneo, that offers riders little chance for respite amidst a long series of climbs and descents. A 44km circuit through the vineyards of the Alba area is set to be completed twice in the race’s finale. Riders will tackle the climbs of Rocchetta Palafea, Mango, Barbaresco and Diano d’Alba before entering the circuit after leaving Grinzane Cavour. The circuit itself features the climbs of La Morra, Barolo and Monforte d’Alba. The race’s final climb is the same the peloton faced at the finish of the Barbaresco-Barolo ITT in 2014’s Giro d’Italia, now with an extra stretch of ascending required before reaching the line.

The town is named after the first martyr of Christianity, Santo Stefano, and after the Belbo river, which flows through the centre. Strategically located at the beginning of the road leading from Alba through the entire Belbo valley, this territory played a key role during the Roman era, as well as the Middle Ages. The valley has always been a land of monasteries, with communities of Cistercians and Discalced Franciscans working in Santo Stefano between 1600 and 1840. Major historical and artistic legacy includes the Sacro Cuore di Gesù, a beautiful church housing a 10th century copper cross. Santo Stefano Belbo is the emblem of Cesare Pavese’s poetry. The author was born and spent most of his youth there, developing a love-hate relationship with the area, which found its highest expression in Pavese’s novel The Moon and the Bonfires.

The earliest evidence of Castagnole delle Lanze dates back to the Roman era, most likely because the town lay along a branch of the Via Emilia. One of the most eventful moments in the history of Castagnole, however, was in the Middle Ages, under Manfred I, known as Manfredi Lancia. The feud was later handed over to Valentina Visconti on her marriage with Louis de Valois, Duke of Orléans. In 1573, part of the territory came under the control of Emmanuel Philibert, Duke of Savoy, and, later on, of the Alfieri family. The municipal territory of Castagnole delle Lanze is composed of two separate areas, one rising uphill, and one lying in the new town, which was founded in the early 1900s, and is the “powerhouse” of the local economy (with winemaking playing a key role).

The beautiful Barbaresco is a world-famous wine-producing village. The full-bodied red wine of the same name, made from traditional Nebbiolo grapes, is a major catalyst for tourism, which is one of the mainstays of local economy. Main sights here include an old castle with a massive tower. The picturesque village lies along river Tanaro, at the heart of a large chain of gentle hills creating one of the most beautiful landscapes in Italy, which earned this territory the recognition as UNESCO World Heritage site in 2014.

Located at the heart of a very diverse region, Alba is the major historic town in the Langhe area, and is recognised as the white truffle “capital”. The culinary industry still plays a major role in the cultural and economic development of the town, a place where micro-agriculture, food companies and multinational corporations co-exist. Promoting the local culinary culture is paramount, and goes hand in hand with consumer education, as well as with the promotion of short production chain processes. Speaking of Alba as a major tourist destination, truffle and wine festivals almost play a more important role than the city’s considerable monumental and artistic heritage – such as the Duomo with its Romanesque bell tower, the Gothic church of S. Domenico, the elegant Baroque churches or the Mediaeval red-brick towers, just to name a few examples.

The town is probably named after Diana, the goddess of hunting and forests. The history of the town dates back to a thousand years: in the Middle Ages, it was a major military city, even more powerful than Alba itself. In 1361, it was occupied and set on fire by mercenaries hired on by Leonetto di Clarenza, it passed on to the Visconti family of Milan and, later on, to the House of Savoy. Following the treaty of Cherasco, in 1631, the town ultimately became a possession of the House of Savoy, under Victor Amadeus I. Located just a few kilometres away from Alba, Diano is divided into three separate areas: the old town, the so-called Valle Talloria – where most of the vineyards are – and the industrial district of Ricca. The castle walls offer a lovely view of the Barolo vineyards and of the Langhe hills.

A 40-minute ride away from Alba (the white truffle capital), Dogliani is a lovely village nestled at the heart of the Langhe, among the vine-clad landscape. Strategically located between the Alta Langa and the Barolo hills, the town has always been a major historical and cultural centre. Main sights here include the parish church dedicated to saints Quirico and Paolo, topped by a huge dome and designed in 1859 by the versatile architect Giovanni Schellino, who was dubbed the local “Gaudì”, as his Spanish counterpart.

Barolo is located in the historical region known as Langhe. Rising on a small plateau, and surrounded by the mountains, the town is most renowned for its vineyards and its different red wine varieties, made from Nebbiolo grapes. There is no exact information on the foundation of the village. Although the area was inhabited in prehistoric times, the first documented settlement – a Barbarian one – dates back to the Middle Ages. Under the Lombard rule, the village was part of the county of Alba; however, in 1250, the Falletti family bought all the possessions of Barolo, hence sealing the fate of the place and of its surroundings forever. The legacy of that family can be found in the ancient Castello Falletti, originally built in the 10th century to protect the village against the invaders. The castle complex is quite large, and includes a number of attractions such as a museum and a wine house. Barolo is indeed a major wine-producing town, which attracts large crowds of tourists. However, this hasn’t affected the peaceful temperament of the local population, nor their pace of life, thus making the town the perfect place to find peace, in the quiet setting of the surrounding verdant hills.