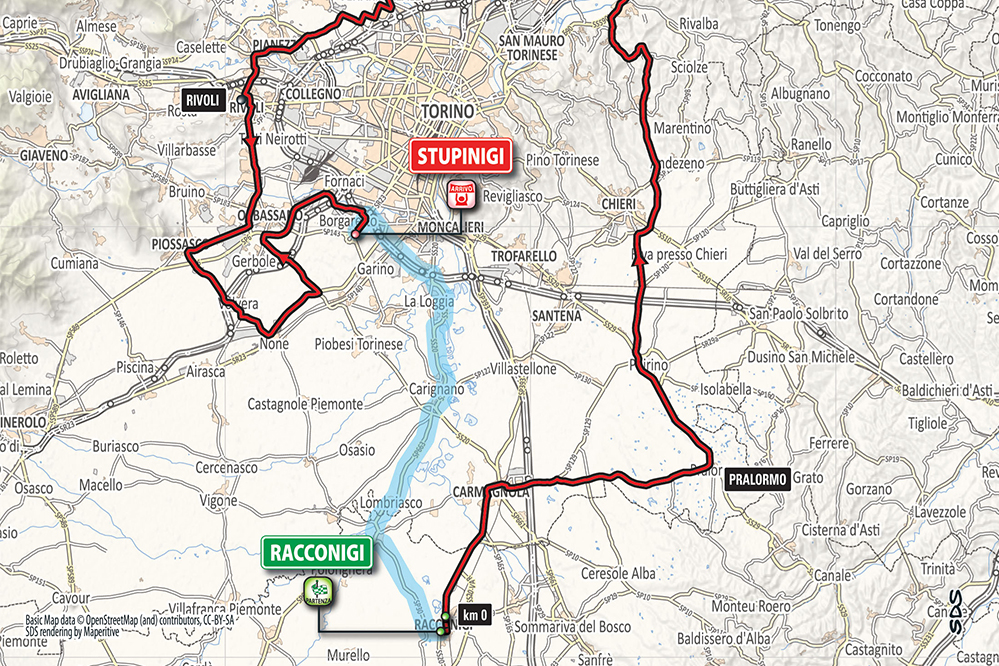 Good morning from the 102nd GranPiemonte NamedSport, organised by RCS Sport/La Gazzetta dello Sport with the support of Regione Piemonte. The race has started from Racconigi and will finish in Stupinigi after 191 kilometres. This edition features a course that will pass by many of the great houses of the Savoia family, the former Kings of Italy, in Racconigi, Pralormo, Agliè, Venaria Reale, Rivoli and Stupinigi. The route has been specifically designed to celebrate these important monuments, which are among the region’s highlights.

The route is mainly flat with some climbs and descents around Turin. From the start at Racconigi the route goes up part of the Superga hill from Chieri towards Chivasso – on regular roads, sometimes twisty and featuring short climbs and descents – and then becoming flat up until Agliè. The feed zone around the middle of the course (km 89-92) in Ozegna is followed by another flat section through Venaria Reale and Rivoli. Here the roads, in the city centers, have more bends and undulations, with some narrow points. After Rivoli the route runs on wider roads until the finish straight in Stupinigi.

Discover more about the route.

Racconigi, in the province of Cuneo, is named after Raco, a Longobardic landowner of the 7th and 8th centuries, although Late Bronze Age relics have been found. Major renovation in the 18th century gives the city a modern appearance, and although a major city of silk since the 15th century, Racconigi is now better known for its Castle.

Built in the 11th century as a fortified house in the Marquisate of Turin, it became the property of the marquises of Saluzzo, and eventually of the House of Savoy. It has been remodelled over time, especially in the 1800s under King Charles Albert when the gardens were redesigned, and the interiors were refurbished by Pelagio Pelagi in the Neoclassical and Eclectic style. In the early 20th century the town became the favorite holiday venue of King Victor Emmanuel III, and the royal apartments reflect the evolution of taste throughout the 17th-20th century, while the gardens retain their 19-century Romantic style.

The old town’s foundations date back to the 13th and 14th centuries, and its castle – originally built in the 13th century as a simple fortress – has always been linked to the noble families that have ruled Pralormo. The castle was extended by the Roero family in the 14th century, and then divided into three parts in 1399. The building was further partitioned following the evolution of the fief until 1680, when it was acquired by Giacomo Beraudo, the ancestor of the Beraudo family that currently lives in the castle and who has also extended the castle over time.

Agliè was founded over the ancient Roman settlement of Alladium; notable citizens included Filippo di Agliè and Guido Gozzano. The city has a magnificent castle dating back to the 12th century, which survived the rivalries between the Guelphs, the Ghibellines and the local feudal lords, and was first transformed only in the 17th century, under Filippo di Agliè. In the 18th century, it was acquired and renovated by Charles Emmanuel III for his second son, Benedetto Maria Maurizio. The restoration work also involved the village, and the new parish church was connected to the castle via a two-storey tunnel.

The gardens were also redesigned following a stringent symmetry. Under Napoleon’s rule, the castle was turned into a lodge and the park was parcelled, but the palace was then returned to the Savoy family in 1823. The castle got its present-day appearance under Charles Felix who redecorated the interiors, the Galleria Verde and the Sala Tuscolana, with a collection of archaeological finds. The gardens were subsequently redesigned in the Romantic style.

Founded in Roman times, Venaria Reale is one of the only two cities in Italy named “reale” (translates as, “royal”), and is home to multiple residences of the Royal House of Savoy, with the magnificent Reggia (Royal Palace) and the royal apartments in Borgo Castello, at the heart of the “La Mandria” Regional Park. The highlights of the Royal Palace include the charming mid-17th century Salone di Diana, by Amedeo Castellamonte, the majestic Galleria Grande, the grandiose Cappella di Sant’Uberto and the stables, designed by Juvarra in the 18th century. The building complex is considered an absolute masterpiece of Baroque architecture.

The historic village center was designed by architect Castellamonte, and the tiny alleys of the old town are well worth a visit.

Rivoli was first settled around 996AD. The village was built around a strategically located fortress , and the House of Savoy later became the ruling family in 1247; the castle, however, only became a royal residence in 1559. Emmanuel Philibert had chosen Turin as the new capital, but the city was under the French domination; therefore, the court settled in Rivoli, where Charles Emmanuel I was born. The Castellamonte architects were asked to transform the old manor, and the renovation work was assigned to architects Garove, Bertola and finally Juvarra. The latter conceived an ambitious project to transform the building into a royal palace, symbolizing the power of Victor Amadeus II, yet the venture was never completed, with work interrupted during the construction of the lobby, which remains still open-air. The renovation work was resumed under architect Randoni after the Restoration, but the castle’s importance was already in decline. After suffering extensive bomb damage and collapse during the 20th century, the castle was finally restored in 1979, and it now houses a Contemporary Art.

The hamlet of Nichelino, in the province of Turin, Stupinigi is renowned for its Royal Park and hunting lodge (Palazzina di Caccia), featuring several landmarks such as the Castelvecchio, dating back to the High Middle Ages. The magnificent castle was designed by Filippo Juvarra and built from 1729 as a venue for major soirées, in the Rococo style, prevalent at that time. It is one of the most outstanding 18-century building complexes in Europe, and became the residence of the Royal House of Savoy, of Napoleon, and of Queen Margherita in the early 20th century. It still houses the original décor, valuable paintings and masterpiece furniture, and is now open to the public following major renovation works.

GranPiemonte and Il Lombardia will be broadcast in all the five continents.

RAI, the races’ host broadcaster, will produce the international feed with two hours live for GranPiemonte NamedSport, plus an additional hour for Il Lombardia NamedSport.

In France the races will be broadcast live on La Chaine L’Equipe, while Eurosport will cover the rest of Europe. Il Lombardia will also be available on Eurosport Asia Pacific.

In the rest of the World, the races will be broadcast on OSN in the Middle East and North Africa, Supersport in South Africa and Kwese Sports in the remainder of Sub-Saharan Africa. In Japan the races will be available on the OTT platform DAZN, and in New Zealand on Sky Sports.

In top of that, Il Lombardia will be broadcast live in Switzerland on SRG SSR (on RTS Deux in French and on RSI La2 in Italian) and in Belgium on VTM Medialaan. The total number of territories in which the “Race of the Falling Leaves”, the last Classic Monument of the cycling season, will be aired, is 193.